OFF THE POST NEWS
Home Players Soccer gamers and different volunteers beautify the neighborhood and honor the legacy... 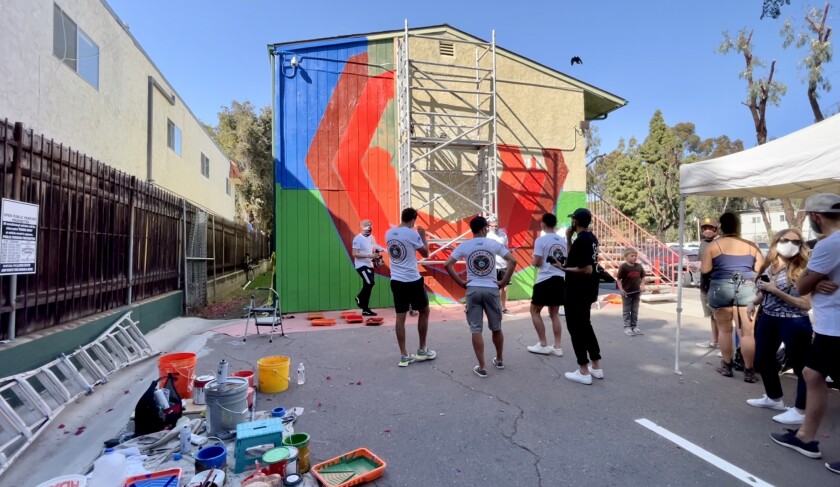 San Diego Loyal volunteer and professional soccer players gathered on César Chavez Day Wednesday to honor the labor leader as they painted a 20-foot mural as part of a beautification project.

The non-profit Chicano Federation worked with the team to organize the community event, which was attended by nearly 30 volunteers of all ages.

This project was carried out in the Chicano Federation’s Delta Apartments complex in the Shelltown neighborhood of southeast San Diego. The complex houses almost 200 people. This property is one of nine properties the association owns and manages as part of its affordable housing program.

CEO Nancy Maldonado said the goal is to honor the life and legacy of César Chavez, a leader with whom the organization shares the values ​​of service and upliftment for the most vulnerable communities. The project also gave the neighborhood more color and vitality, she said.

The design of the main mural, visible from the street, shows children playing soccer in front of a god’s eye (ojo de dios), as seen in Huichol art, explained Chula Vista artist Yessenia Hulsey. “I wanted something that was very lively and positive.”

The mural to be completed in the Delta Apartments complex.

San Diego loyal players and other volunteers gather to paint the community mural in the Delta Apartments complex.

Hulsey expects to finish this and two smaller murals this weekend. The project also includes improvements to the building landscape.

She was looking for a design that anyone could paint, either with their hands or with a brush. This was the case with midfielder Alejandro Guido, who dipped his hands in paint and left his handprint on the mural.

“We are delighted to be able to contribute with our grain of sand and to remember a great person,” said Guido, who grew up in the San Diego-Tijuana area.

U.S. soccer star and San Diego Loyal manager Landon Donovan emphasized the team’s commitment to the community and said he was delighted to partner with local organizations that also celebrate diversity.

“This neighborhood is a predominant Latino community and we represent that too, our players, staff and everyone who works with us. It is important to me to make a contribution to our community. “

admin - January 21, 2021
0
Hendersonville High Boys' football coach, Stuart Scott, is also a nurse. So if any of his players have any medical problems in training...