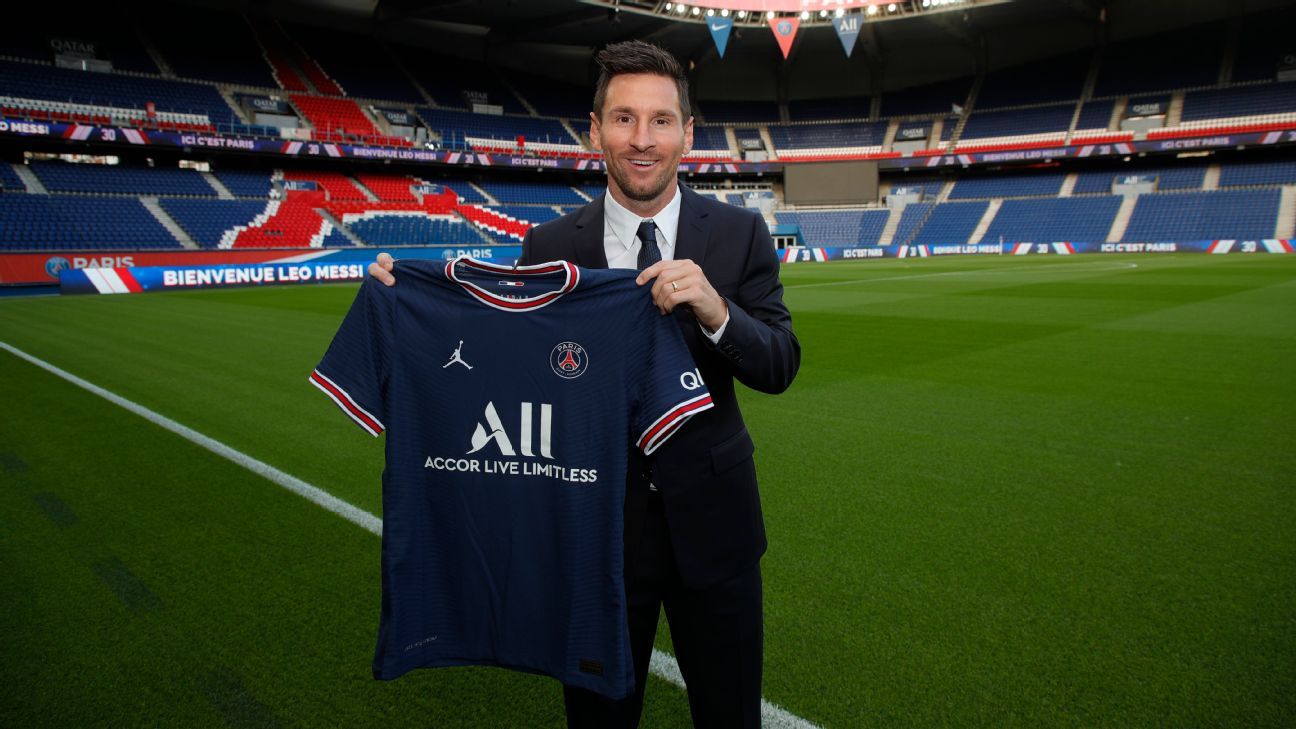 This transfer window was amazing. Given the challenges of the past 18 months amid the COVID-19 pandemic and the resulting financial crisis, no one really thought anything would happen at all.

According to Transfermarkt, the English Premier League led the way by spending 1.35 billion euros this summer (almost as much as Barcelona’s debt) while there were 248 new signings and some of the mega-deals that have taken place in that window blew us away.

It’s not often that giants like Ronaldo and Messi move clubs in a window, so fans have been really excited since July 1st. Here we pull out the clubs and players who won and lost the window.

Lionel Messi’s arrival in Paris on a free transfer could be the best deal ever. Paris Saint-Germain Football / PSG via Getty Images

The Parisian giants, backed by owners from Qatar’s ruling family, have enjoyed one of the best transfer windows of modern times. The free transfer of six-time Ballon d’Or winner Messi from Barcelona is undoubtedly the icing on the cake, but the landing of arguably the best young goalkeeper in the world, Donnarumma, alongside possibly the best right-back in the world in Achraf Hakimi, has seen them make others spectacular signings. With Wijnaldum, Ramos and the young left-back Nuno Mendes, PSG put together half a squad of world champions for 72 million euros net within just a few summer months. Now the pressure is high not only to win back the Ligue 1 title, but also to finally conquer the Champions League.

Oh, and they also managed to keep star striker Mbappe by turning down a € 200million offer from Real Madrid for just over a year before he can move on for a free transfer. Time will tell if that was wise, but they’ll reap the benefits this season at least.

With a happy ending to the year-long Sancho saga and the arrival of a world-class center-back in Real Madrid’s Raphael Varane, it would have been a more than decent transfer window at Old Trafford even before Cristiano Ronaldo’s arrival. However, the 36-year-old’s return to the club puts pressure on United. Gone are the days when expectations were downplayed and manager Ole Gunnar Solskjaer faces a new challenge of managing his former teammate and possibly promoting players to his first XI for the first time. Winger Daniel James’ departure to Leeds was also good business for the club.

The club went into the market with the aim of consolidating a Champions League winning squad with potential. Lukaku got the bill for a high profile center forward of proven quality and while the hunt for Jules Kounde – a brilliant defender who would add to virtually any team in Europe – stalled due to Seville’s desire to hold out € 80m, Thomas Tuchel did Chelsea defense already formed into a tight, well-functioning unit. Loan from Atletico Madrid midfielder Saul Niguez, a good utility player who can take on multiple midfield positions, was a late bonus and the club did good business to attract Tammy Abraham (€ 40m), Kurt Zouma (€ 30m) ) and many others who make a profit of around 2 million euros.

While none of the summer signings have made headlines, Leicester have stuck to their guns and focused on the segment they know best: emerging players with high potential from European leagues. Hardly any other club can see the value better than Brendan Rodgers’ scouting team, and the arrival of Lille midfielder Boubakary Soumare and FC Salzburg striker Patson Daka follows the pattern of previous transfer windows. Leicester also moved quickly to sign Denmark international Jannik Vestergaard, a decent defender familiar with the Premier League after a stint in Southampton when Wesley Fofana was injured in the preseason.

Unlike Harry Kane, Grealish eventually prevailed by signing with Manchester City. Arguably more of a luxury commitment – the prerogative of the ultra-rich clubs – rather than an essential addition to a team that already has many high quality forward options. Instead of making too much of a fuss, Aston Villa immediately invested the 120 million euros in a proven Premier League striker (Danny Ings), creativity from across the board (Emiliano Buendia) and the fast-paced Bayern Leverkusen striker Leon Bailey. So it was a win-win situation for the player and his former club.

Julien Laurens wonders why Barcelona will improve on a direct rival for no consideration for Antoine Griezmann.

Huge debts of 1.35 billion euros, internal instability and the rigid implementation of financial controls by the Spanish league contributed to the unthinkable: Messi, arguably the greatest player of all time, left Barcelona after 21 years and moved to Paris Saint-Germain. And also for free. Another blow to one of the most prestigious clubs in the world is the embarrassment over the late registration of their signings – Aguero, Memphis and Eric Garcia – further evidence of the current chaos surrounding the club. As a result, they left Emerson Royal for 25 million and Miralem Pjanic.

A saving grace has been that older players Gerard Pique, Sergio Busquets and Jordi Alba all agreed to make salary cuts to help the club’s finances, but Barcelona had one of the worst windows in history and there are signs that they are things won’t really improve the near future.

The English captain was forced to stay with Spurs after his efforts to move to Manchester City were thwarted by chairman Daniel Levy – or perhaps the champions’ unwillingness to pay the £ 150million required to make his signing . The silver lining for Kane is that he is back on a Spurs team with a record of 100% and is at the top of the Premier League table after three games. And like other stars who have flirted with rival clubs, scoring a few goals – especially in the North London derby in just a few weeks – is a surefire way to mend relationships. The Spurs themselves can look back on a decent transfer time. In addition to keeping Kane, their defense was greatly improved with the addition of Emerson Royal and Cristian Romero, while Son Heung-Min also signed a new deal.

Inter have not been hit quite as badly as Barcelona but there have been well-publicized financial troubles and it was no surprise that this summer would challenge the Serie A champions. The biggest loss was certainly the resignation of head coach Antonio Conte at the end of the successful season – although the club started the new season convincingly with six points from the two opening games. Influential right winger Hakimi quickly followed the head coach to Paris Saint-German for € 70m, while last season’s top scorer Lukaku joined Chelsea for € 115m. Inter have managed to keep Lautaro Martinez, signing Denzel Dumfries, Joaquin Correa, Edin Dzeko and Hakan Calhanoglu, but their squad is certainly weaker.

Gab Marcotti and Julien Laurens are impressed by Willian’s decision to terminate his contract with Arsenal.

Manager Mikel Arteta may have landed a lot of potential – Brighton’s Ben White and Bologna’s Takehiro Tomiyasu are keen, mobile defenders who are good at it – but spending € 28m on substitute goalkeeper Aaron Ramsdale was an exaggeration. The same goes for the € 40million spent on Real Madrid midfielder Martin Odegaard, more than Madrid paid for the far superior Eduardo Camavinga (€ 30million). Arsenal’s strategy of rejuvenating and reshaping its squad is certainly not a bad idea, but they only got a fee for one player, Joe Willock, and were lucky to see 33-year-old Willian picking up his £ 100,000-a-week contract for a three-year contract, to join the Corinthians. However high the talents may be, questions remain as to how they will develop in a troubled environment. Three defeats from three Premier League games without goals is a tough start.

Although Benitez is aware of the financial constraints before taking the managerial job at Everton, Benitez will have to leave a bitter taste in this transfer window. While his predecessors had fat transfer budgets, Benitez has to face the challenge of reviving a squad that he had little influence on building up. He couldn’t even enjoy Moise Kean’s potentially exciting return as a two-year loan from the Italian striker to Juventus was formalized on Deadline Day. The arrival of wingers Demarai Gray and Andros Townsend and 31-year-old striker Salomon Rondon point to a club in trouble.