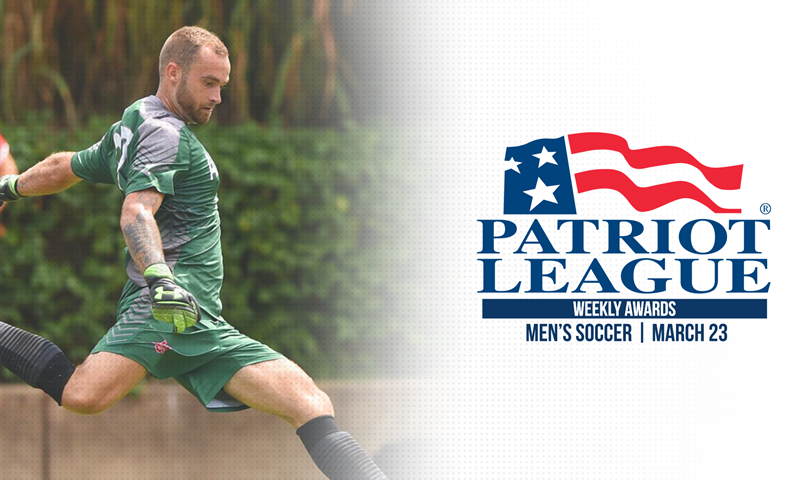 American senior Jake Agnew was named Patriot League Football Goalkeeper of the Week, while midfielder Jason Bourgey was named Rookie of the Week.

* Luchini recorded a hat trick along with the winning goal to lead the Mountain Hawks 4-1 past the bison.
* Luchini scored in the 48th, 75th and 78th minutes and gave Lehigh the win. His trio of goals marks the second hat trick of his career.
* The junior has scored 20 career goals, 46 points and 10 winning goals in his 41-game career.

* McGonigle led the team with one goal and one assist in Saturday’s 2-1 win at Army West Point.
* In the 18th minute, the runner-up gained possession and fed Dylan Scanley with a goal to give the Crusaders a 1-0 lead.
* In the 67th minute he scored the winning goal after a cross from Max Krause.

* Echeverria scored their first college goal in the second minute of the Leopards 2-1 win over Colgate on Saturday to remain undefeated this spring.
* The junior was also part of a line of defense that kept the Raiders off a shot on goal.

* The newcomer set up the winning goal against Loyola Maryland with a feed to Kyle Hellmann.
* Bourgey’s first career sponsorship helped end the game in just 76 seconds of regular time.

* Hellmann scored two goals in a 2-1 win over Loyola Maryland on Saturday night.
* The first goal came in just 76 seconds in regular time, while his second goal came in overtime.

* Weiss scored his first college goal in Colgate’s 2-1 loss at Lafayette on Saturday. He brought down the Raiders in the 87th minute within one.

* Conklu took his first win of the season at Army West Point with two saves in goal.

* The senior scored his second goal of the season in the 51st minute in Saturday’s 2-1 win over Colgate, helping the Leopards extend their winning streak to three.