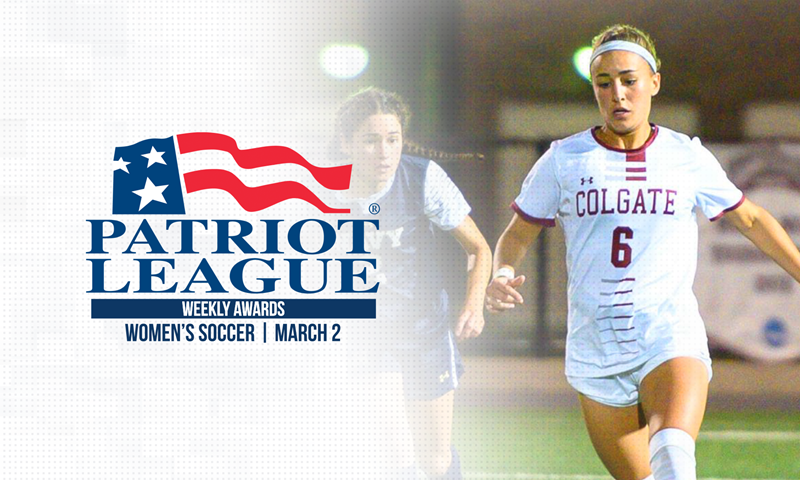 BETHLEHEM, Pa. – Colgate received four of the Patriot League’s weekly women’s football awards, while Navy took one home when the league announced the first round of awards for the 2020-21 season on Tuesday.

The Navy goalkeeper Mattie Gallagher was named Rookie of the Week, while Colgate senior Sophia Boggs rounded out the Patriot League Women’s Goalkeeper of the Week award.

* Vaughn scored her second college goal and first goal in Sunday’s 2-1 win over Navy.
* Their early goal gave the Raiders a 1-0 advantage in the 19th minute.

* Pinkus scored the winning goal in two overtime hours in the 2-1 win at Navy on Sunday.
* She headed a corner kick from the center of the box into the back of the net, just 17 seconds in double overtime to seal the win.

* Boggs improved her career record to 8-0-2 in goal for Colgate on Sunday in the team’s win over Navy.
* She made two saves, including one in overtime, to help the Raiders prevail 2-1. The golden goal came with 17 seconds in double overtime.

* Gallagher made five saves in double overtime against Colgate. The rookie made two saves in the second half and one in overtime with a dive stop in the 103rd minute.

* Tran shot four shots at field height and placed one in the back of the net in the 28th minute to make it 1-1.

ABOUT THE PATRIOT LEAGUE
The Patriot League is in its fourth decade of academic and athletic achievement and continues to show that student athletes can excel in both academics and athletics without sacrificing high standards. The Patriot League’s athletic success is achieved while its member institutions continue to be committed to the core principle of admitting and promoting student athletes who are academically representative of their class. Participation in athletics at Patriot League facilities is seen as an important part of comprehensive training.