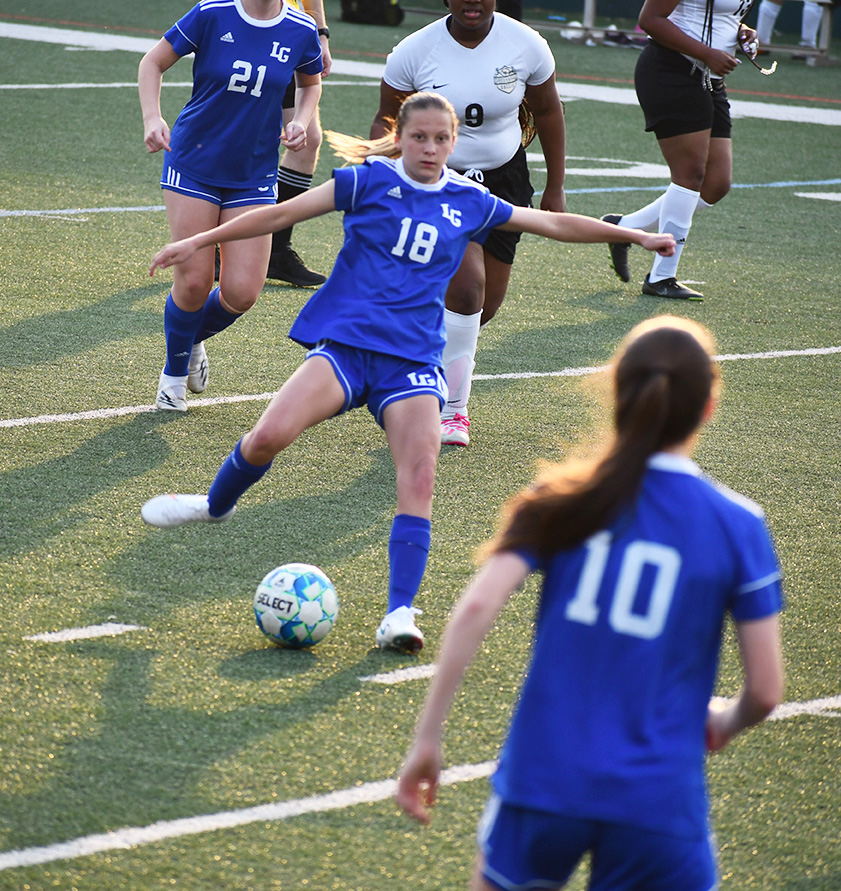 LaGrange High in Sydney Ormsby’s specialty was scoring goals and her teammate Rachel Harry was tasked with keeping balls out of the net.

Both players were excellent at what they had to do and their good work was recognized earlier this month when the All-Region 2 AAAA football team was unveiled.

While Ormsby was named Midfielder of the Year, Harry was named the best goalkeeper in the region.

A total of nine Lady Grangers formed the All-Region team in a successful season that ended with a defeat in the second round of the state playoffs.

LaGrange’s boys’ team, which won a regional championship and made it to the third round of the state playoffs, were also well represented on the all-region team.

That group included senior Cason Blackburn, who was named Goalkeeper of the Year, while Shane Pulliam was named Coach of the Year.

Nine LaGrange players made up the All-Region team, five of which received the first-team award.

For the Lady Grangers, Ormsby led the team with 22 goals, including a five-goal performance against Shaw, and she had four goals against Spencer and three against Troup.

Harry has been solid all season and she has nine saves in a 4-0 loss to Oak Mountain in the high season. She has eight saves against East Coweta and six saves against Columbus.

Emma Matthews, a senior citizen, who started as a newcomer since childhood and has rarely left the field this season, was also honored as the first team in the All-Region team.

“She started every game for us and played essentially every minute unless we put different people on the field,” said LaGrange coach Colin Ross.

The first team was also made up of freshman Sam Cottle, who was LaGrange’s second top scorer with 13 goals, and they have had three games in which she scored three goals.

Another first-team player for LaGrange was Kylie Russell, who will continue the sport at LaGrange College.

“She understands what she’s trying, what the team is trying to do,” said LaGrange coach Andy Fritchley. “She’s a better teammate than a player. She is just an extraordinary person. The girls look up at her. They love to play next to her. And when the pressure eases, she’ll play a piece. “

Four LaGrange players are second-team All-Region players, including Tatum Fritchley and Miller Williamson, who finished third on the team with seven goals each.

Olivia Sato and Lily Skipworth, valuable defenders for LaGrange, also made up the second team.

It’s been an extraordinary season for the Grangers.

LaGrange won the regional championship with an unbeaten record and reached the third round of the playoffs before losing 3-1 to East Hall.

One of LaGrange’s top players was Senior Cason Blackburn, who was voted the region’s best goalkeeper.

Even when things crashed defensively, Blackburn was usually there to keep the opposing team from getting the ball into the net.

Blackburn will continue his football career at Lindsey Wilson College and signed his letter of intent before the start of the season.

Another all-region first-team player for LaGrange is the senior Pearson Knight, who led LaGrange with 19 goals.

Knight had five goals this season in a win against Spencer and four goals against Hardaway.

Junior Tripp Hollstrom had a big season with 17 goals and he had two games in which he scored three goals.

Four LaGrange players were all-region picks of the second team.

This group also includes senior Caleb Kostial, who scored the only goal of his team in the playoff loss to East Hall.

Two members of LaGrange’s outstanding senior class, Ander Gay and Jacob Rogers, also made up the All-Region team, as did Junior Miller DeVane.

Pulliam, who had a stellar four-year tenure as director of the LaGrange program, was the Region’s Coach of the Year. LaGrange won the regional title with an 8-0 record and made it to the state’s quarter-finals for the first time in ten years.

Scouting report on the Danish team for the Euro 2020 semi-final match between England and Denmark.

So you will get all soccer outcomes from one place

USMNT Gamers In The Champions League: What To Count on From...